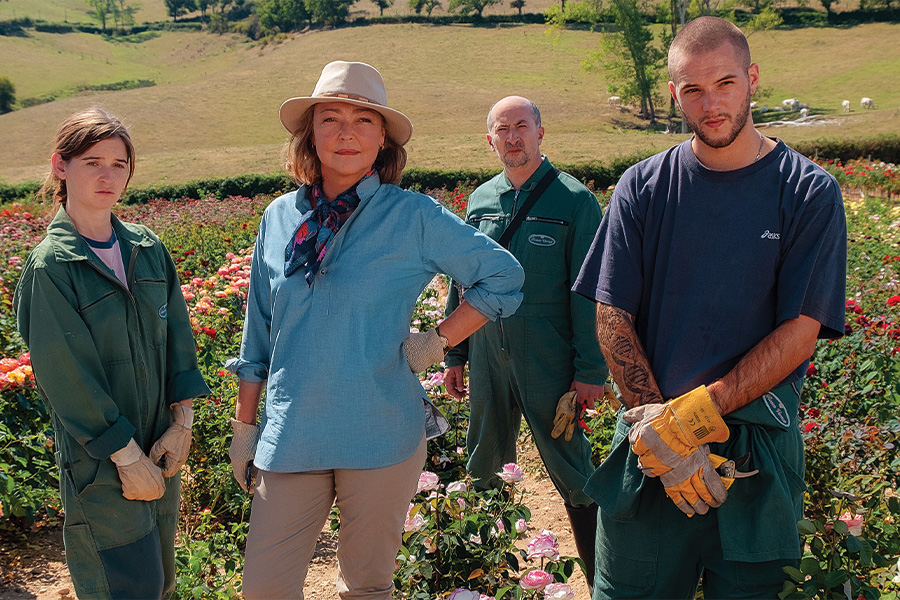 ​​What would you get if you crossed Willy Wonka’s Chocolate Factory with the lush botanicals of The Secret Garden? With careful pruning and breed-selection, you might luck out and find yourself in the verdant world of Pierre Pinaud’s The Rose Maker. Set in a rural valley of rolling hills near Paris where roses are bred, cultivated and grown to compete for the coveted Golden Rose award, there are bursting blooms in vivid hues in almost every frame. The film opens at the contest, which was once dominated by the unparalleled rosemaker Eve Vernet, whose fortunes have taken a turn since the farm’s founder, her father, died 15 years earlier.

Eve, played with imperious self-importance by Catherine Frot, is the magician behind the curtain at Vernet, mixing heritage roses from her father’s collection to wow the crowds with new and improved hybrids year after year. But the crowds are no longer wowed, having been lured to the far side of the contest grounds by more colorful, more fragrant creations of Vernet’s ambitious competitor, Lamarzelle, (Vincent Dedienne), who not only walks away with the Golden Rose, but threatens to absorb Vernet’s beloved family farm into his industrial rose-growing empire.

When Eve and her faithful sidekick Vera return to the Vernet gardens, the viewer steps into a world of Pure Imagination, complete with a twinkling soundtrack. Eve walks between dewy bushes of luscious pinks and reds, yellows and whites, fat petals at her feet. Eve doesn’t realize it, but Vera is also working her own kind of magic, putting off creditors and lining up a trio of ex-convicts from a nearby rehabilitation shelter to provide free labor while Eve sells away the farm’s assets, one tractor and couch at a time.

It’s when this trio of unlikely characters come together with Eve to try to pull off a heist at Lamarzelle’s factory that the Rosemaker picks up its comedic pacing and gives way to warm, insightful fun. The curtain is even lifted at one point, allowing the laborers—and the viewers—to almost rub noses with the fragrant flowers and learn how, with pruning shears and petri dish, biology can change the course of a family’s destiny.

The movie is playful even as it delves into more serious themes like the cruelty of nature and family abandonment. The flowers are the stars of this deceptively simple film, with its scant, subtitled, dialogue and a handful of characters. But its modest scale only emphasizes the message that growing things from the ground up is rich with its own reward.