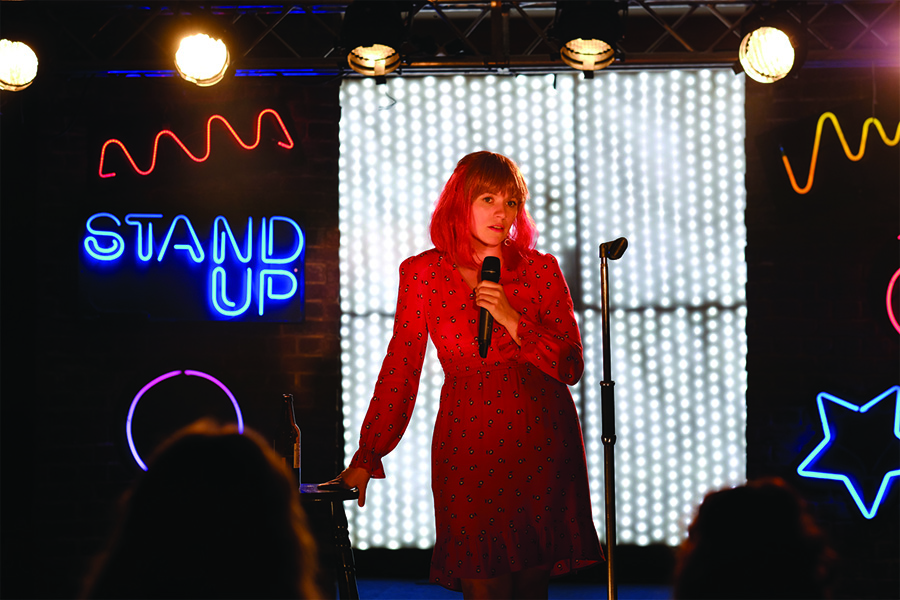 What is it about the lone mic standing on an empty stage in front of a buzzed audience that brings out a performer’s darkest demons?  The microphone stands at the center of the film “The Bright Side,” which stars Gemma-Leah Devereux as Kate, a 35-year-old one-time starlet who is numbing herself through her days popping pills and, at night, laughing off depression with self-loathing monologues at the local comedy club. What starts as dark comedy takes a bleak turn with the addition of a dire cancer diagnosis.

When we meet Kate, the only sure loves in her life are her brother James and her 5-year-old niece Alex, the one person with whom she seems to be able to tolerate silence. Otherwise, she is testing her deadpan delivery on all manner of spectators. We watch and listen as she navigates life at home, talking trash to her goldfish, testing out a sacrilegious monologue on a captive audience of fellow chemo patients and, in a couple of quirky moments, clutching both of her breasts like puppets, giving each a distinctive voice in an argument.

Her constant commentary is only curbed when another patient reminds Kate: “It’s a chemo ward, not a comedy club.”

Through her monologues, we learn that humor was her way of surviving a terrible childhood. Her cynicism is so obviously a mask for deep despair that in one scene, when an interviewer asks her poignantly, “How do you really feel?” she cannot respond. The silence resonates with a sense of relief.

Director Ruth Meehan sets her debut feature film in an Irish town whose austere concrete and treeless landscape offer contrast to the lush beauty of the rural fishing retreat where Kate connects with fellow chemotherapy patients to learn about fly fishing and ultimately form a convalescent sisterhood. The story never wallows in sorrow, but keeps a reflexively comedic pace.

Devereux encompasses Kate’s struggles with mental illness, disease and self-destructive behaviors with her whole body, exuding grace and sexuality one moment and then sloppy drunkenness the next. I found myself studying her hairstyles, which framed her intentionally flat facial expressions, flipping from the un-brushed, uneven bangs of despair to the glossy up-do of manic response, followed by a baldness of defiance and a mix-up of crazy wigs revealing a childish insolence.

Meehan is not telling a “Beaches” kind of cancer story of best friends savoring the last days of a beloved life, but instead, her unsentimental story highlights the impact community and connection have on a soul in emotional isolation, even if it is self-imposed, like Kate’s. Can Kate shut up long enough to hear others tell her they care about her? Or will she finally succumb to the voices in her head—and in her breasts—that urge her to seek solace in suicide?

"The Bright Side” isn’t the first film to give a comedian cancer. “Funny People” dropped it on Adam Sandler. “50/50” gave it to Joseph Gordon-Levitt. Inevitably, comedians use their relationships as material to reflect the dichotomy of comedy and tragedy and to force their audiences to laugh at their brokenness. In this moment of suspended animation, when people around the globe are spouting off behind microphones and keyboards attempting to diffuse pain, “The Bright Side” offers a helpful reminder that even a dubious future can outshine a difficult past.