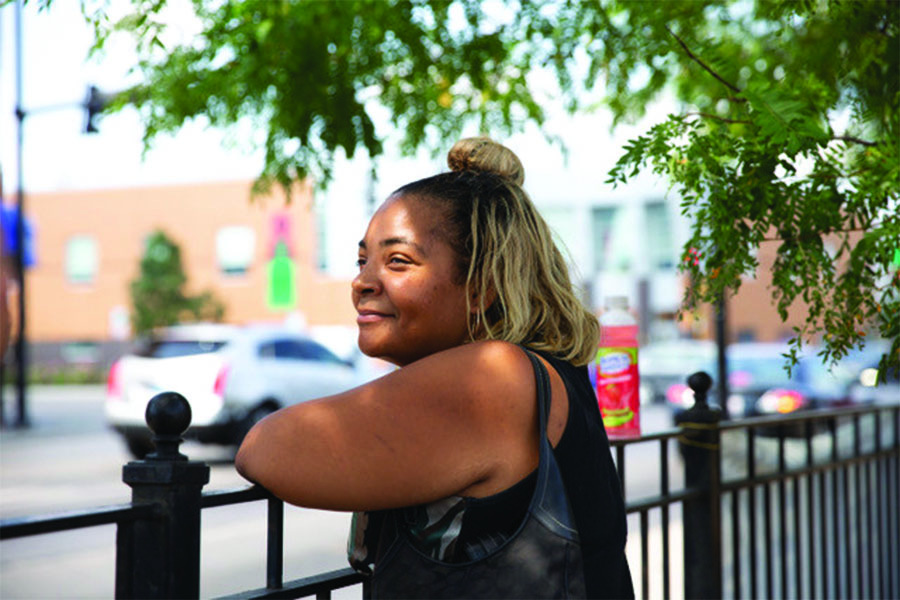 Stronger Together - "Any Given Day"

As the topic of mental health makes itself more known in recent years to the mainstream consciousness, unfortunately partly due to tragic occurrences such as mass shootings, the social stigmas that come attached to people fighting mental illnesses increases as well. But in a heartfelt attempt to uplift and ultimately humanize their stories, Director Margaret Byrne crafts an extraordinary tale centering around the struggles of three friends—and ultimately her own.

Filmed over a five-year period in the city of Chicago, Byrne captures the ugly and triumphant journeys of three individuals partaking in a mental health court probation program. Angela, a mother of four, suffers from severe depression and PTSD (post-traumatic stress disorder); Dimitar, the son of Bulgarian immigrants, from Bipolar I disorder with schizoaffective tendencies; and Daniel, the son of Jamaican parents, from schizophrenia. Dramatic in every sense, Any Given Day is a tragic, yet beautiful tale masterfully told in three exceptionally well-crafted acts.

From a visual perspective, Byrne quickly catches one’s attention with a beautiful opening montage of split-screen depictions of “opposites” in the city of Chicago. Featuring warm sunlight and cold shadows is just one of the ways Any Given Day foreshadows the extremes that its subjects experience, while also showing the passing of numerous seasons.

While Byrne has assistance from several camera operators, presumably mostly for footage where she is in front of the camera, it is mostly herself operating a majority of the shots as shown by noticeable shadows, reflections, and frequent banter with Angela, Dimitar, and Daniel. The overall camerawork of the film is extremely impressive for the most part, especially in the way that Byrne has a sharp eye for framing her subjects in creative and impactful manners. One instance where a handheld shot of her exiting from inside a building to outside leads the camera to become quickly overexposed from the sudden presence of harsh sunlight works superbly as both the end of a plot point and a sort of transition to the next shot. Even if Byrne simply couldn’t change her aperture in time or even thought to, it still stands out as an excellent visual. Drone shots, while ever so slightly overused, ultimately don’t come off as too big an issue as they both track their subjects incredibly accurately while also embellishing the story, and are not there purely for visual splendor.

As stated on the film’s website and trailer, Byrne’s own hospitalization from severe depression during filming ultimately weaves herself into the story in a way she didn’t imagine. Her initial efforts from understandably attempting to be invisible, as filmmakers usually do in documentaries, and her gut reaction to not discuss her own mental illness for it usually being seen as a “weakness,” become undone in true poetic fashion. As she privately discloses, away from Angela, Dimitar, and Daniel, that conversations on her own mental illness make her deeply uncomfortable, she laments the fact that it can’t be any different to her friends that she repeatedly interviews. Perhaps unrelated to her hospitalization, it isn’t impossible however that her interactions with the deeply complicated lives of the others had any impact on her own hospitalization. In a way, Byrne initially saw herself as removed from the struggles of three subjects she initially struck an agreement with to star in her documentary. But it is at this moment that she realizes that not only did she come to truly care for them as good friends of her own, but that they all are also fighting similar battles. The fact that Byrne understands this and still chooses to continue and complete the film is admirable beyond words.

Throughout the film, despite the devastating losses that Byrne and the others suffer, the one thing that remains ever constant—unchanging—is the beacon of hope that their loved ones represent. Whether it is Angela’s youngest child Anthony who motivates her to better herself so that she can be with him, Dimitar’s mother who refuses to give up on him despite an incident where he physically attacked her, Daniel’s supportive sister who looks after him in the place of their parents, and Byrnes’ own daughter who is the light of her life, all four would be even more lost without such anchors in their lives. Because at the end of the day, if not for these people, the future of funding for mental health care programs is uncertain.

According to the National Institute of Mental health, nearly one in five U.S. adults live with a mental illness. As such, it is highly likely that someone dear in one’s life endures what is shown in Any Given Day. While the public slowly, yet hopefully learns that mental illness is not a weakness and something to instead treat with compassion and patience, people living with it deserve all the support and care they can get. For they too laugh, cry, and love just as everyone else.