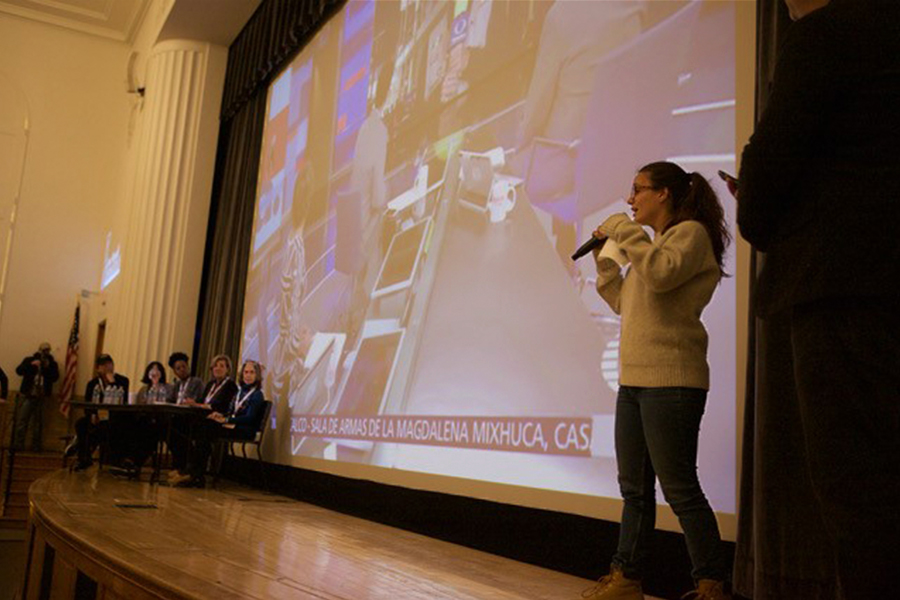 Up on stage, with just a few minutes to present, the six young filmmakers pitched their visions of what a film should be using still photos, a few clips and their own words. On the other side of the stage, judges Mimi Edmunds, Jack Gerbes, Andrea Meditch, Keisha Salmon and Wendy Cohen listened, watched and tried to fill in the gaps to see the stories the way the contestants did. Stakes were high at the 2019 Annapolis Film Festival Shorts Challenge Pitch Contest. The winner would receive a $20,000- $30,000 in-kind production package to produce their short film, which will premiere at the 2020 Annapolis Film Festival. Saturday’s event opened with inaugural year Pitch Contest winner Chuckwunonso Dureke presenting the trailer for her film, “Bride Price,” which premiered later that afternoon. “It changed my life,” said Dureke, whose 10-minute Afro-futurism story turns her routine grocery shopping experience into a mystical traditional Igbo wedding. Ora Dekornfeld went first, presenting her plans for “Walk in the Park,” a story told from the viewpoints of four different visitors to Organ Pipe National Monument Park on the Mexican border; next up was the team of Michael Feld and Josh Covitt, whose “Do Not Use” is the story of a wedding videographer who finds himself struggling to tell a deeper truth; third up was Laura Tejero, who pitched a film called “Frida,” about a “fake news” incident that rocked Mexican media last year; next came Travis Rush, whose “Let’s Make Things Clear” about an off-air broadcast news incident. Aqsa Altaf was last to pitch her “Aliyah’s Project” about a young woman pushing ethical boundaries to get into film school. All the pitches shared common themes of Truth in Storytelling and passionate filmmaking. After a day of difficult decision-making, judges and contestants gathered at Saturday night’s party, where the winner was announced. “I wish we could have five winners because I want to see all of these projects completed,” said Gerbes, director of the Maryland Film Office. The prize went to Laura Tejero. Judge Andrea Meditch, president of Back Allie Entertainment said that Tejero’s story, “has a way of flipping the truth and showing who reveals it.” Or as documentary producer and contest judge Mimi Edmunds put it, “This is like a whole new layer of fake news.” “Millions of Mexicans followed this news story. Two days later they found out nothing is real,” said Tejero of the inspiration for her story. “The main objective is to make the audience think more before believing what they see.”