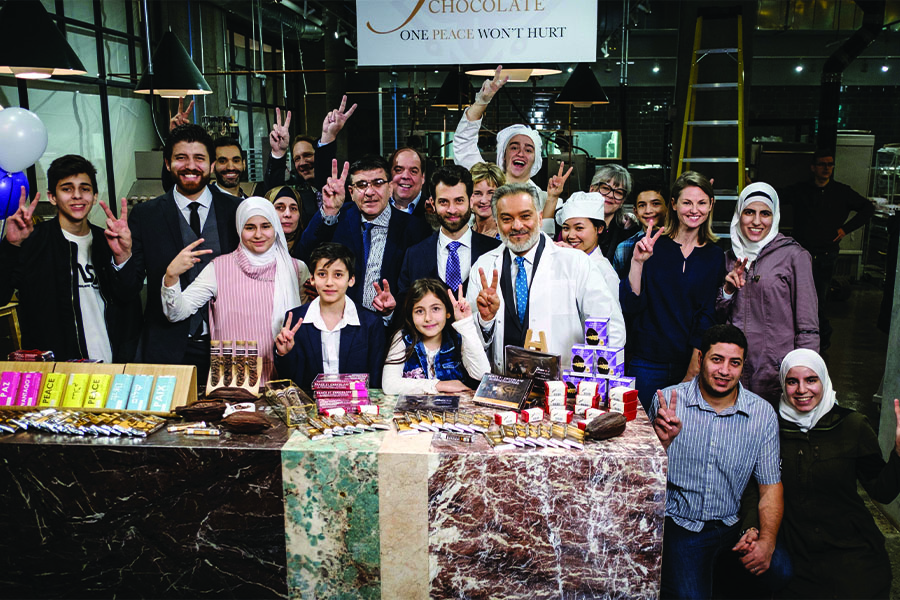 Picking Up The Pieces - "Peace By Chocolate"

Following the still ongoing Syrian Civil War that displaced the Hadhad family in Peace by Chocolate, the takeover of Afghanistan by the Taliban and the current Russian invasion of Ukraine has led to one of the biggest booms of refugees in recent history. With some refugees traveling not only to a different country, but to an entirely different hemisphere, culture shock is but just the first of many looming difficulties for them to acclimate to their new lives.

After living in a refugee camp in neighboring Lebanon, elder son Tareq Hadhad is the first of his family to travel to Antigonish, Nova Scotia in Canada where he establishes contact with his Canadian host family. Although presented through a light-hearted fish-out-of-water comedy lens, the saddening disbelief that Tareq experiences as he goes from a city of five million to five thousand comes up very often. There are close to no other Arabs for his family to rely on for help in assimilating, and a “two, maybe three-hour drive” from the airport to the host family’s house is described as “quick.”

Despite the host family’s abundant patience and support, life only gets more difficult as the rest of Tareq’s family arrives. An accidental visit to a local chocolate store by Tareq’s father, Issam, reignites the latter’s dreams of making chocolate again like he did back at his once prosperous but now destroyed confectionary business in Damascus. Naturally, as his English is very limited, he expects Tareq to help him run the business. However, Tareq’s own stubborn dreams of becoming a doctor naturally leads him into conflict with his father, with the enusing fallout affecting both families living under the same roof.

The drama present in Peace by Chocolate mostly centers around the numerous tense, painful arguments between Tareq and Issam. Despite being a Canadian film that’s predominantly in English, a good amount of the film is spoken in Arabic. While English speakers may not pick up on it, the Arabic spoken by the Hadhads is authentic in the sense that the filmmakers casted actors from Syria to represent the Syrian Hadhads. Just like any language, Arabic comes in different dialects and accents that can vary from country to country. This seemingly small decision is however extremely crucial as an attempt to tell the stories of the Hadhads as respectfully and accurately as possible. In a way, it’s also an opportunity for non-Arabic speakers to be introduced to the beautiful language; while they may not understand what is exactly being said without the help of subtitles, such assistance isn’t needed to feel the deep and genuine emotions behind every spoken word and sentence.

While Peace by Chocolate isn’t above criticism in its select choices to sanitize xenophobia towards immigrants down to subtle, manageable chunks, and its seemingly rosy representation of life in Canada, it’s still important to remember that not every film about a serious subject matter needs to be told in such a candid manner. Choosing to be a more light-hearted tale to inspire more optimism during deeply troubling times is an understandable and respectable choice, and something that ultimately doesn’t detract from the film’s core messages of patience, compassion, and camaraderie among all people.