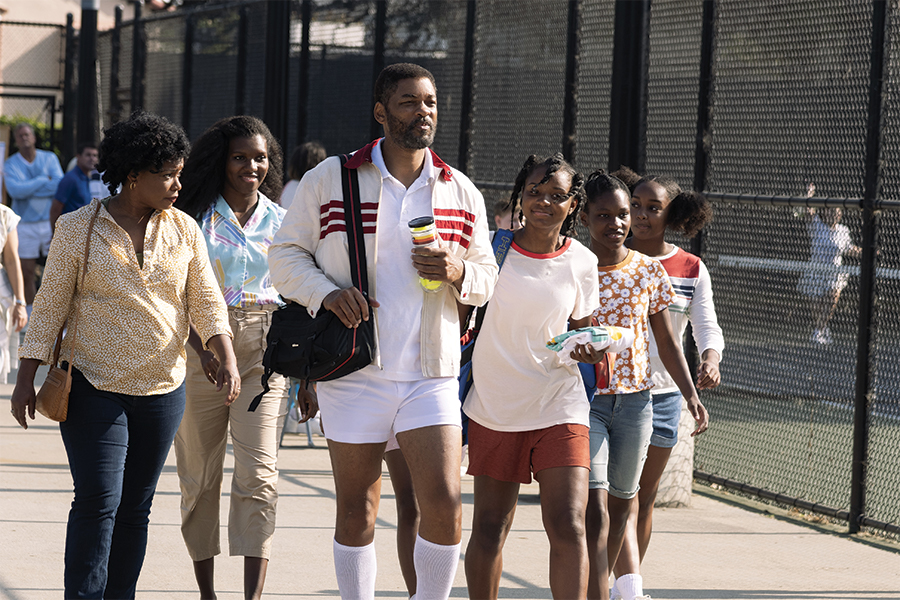 On November 6, the Annapolis Film Society was treated to an advance screening of the spectacular new Warner Bros. film King Richard, produced by Annapolitans Tim White and Trevor White, (the sons of Patti and Geoffrey White, Patti is the co-founder and co-director of the Annapolis Film Festival). After producing a string of hits such as Steven Spielberg’s Oscar-nominated The Post, the Independent Spirit Award-winning Ingrid Goes West, the Cannes Film Festival award-winning Wind River, and the Opening night film of the 2017 Annapolis Film Festival LBJ directed by Rob Reiner, the White Brothers have served up another Ace (to use a tennis metaphor). If this were a baseball movie, I would say they hit a home run.

King Richard is being hailed as a front-runner for the Academy Awards in several categories. Since its World Premiere in September at the Telluride Film Festival, the film has gained favor with critics and audiences alike as indicated by the flurry of positive reviews from Variety, the Hollywood Reporter, the New York Times, The Los Angeles Times, etc and its sweep of audience awards at such top festivals as the Chicago Int’l Film Festival, Philadelphia Int’l Film Festival, Miami Int’l Film Festival, and the Heartland Film Festival. Tim and Trevor now find themselves front and center in the news making Variety’s list of Hollywood’s New Leaders of 2021 and recently the subject of an Indiewire article praising them for all the things they did right in producing King Richard.

The invited audience for the Nov. 6 screening at Maryland Hall was a balance of Annapolis Film Society members, donors, and underserved diverse teens and their parents through organizations in the Annapolis community. The unanimous positive reaction from this blended audience in Annapolis reflects how this film has the power to appeal to a wide audience with its universally inspirational theme.

This ground-breaking film about the career-launching success story of tennis stars Venus and Serena Williams as guided by their unflappably determined father/coach Richard Williams, can speak to anyone who has ever had a dream or an ambitious goal that they have struggled to meet.

In a pandemic-free year, I have no doubt this film would break box office records, as an elusive tent-pole blockbuster that is not a comic-book superhero movie, a high-concept comedy, or some franchise remake. More importantly than box office numbers or winning awards is the fulfilling satisfaction that must come from producing such a masterpiece that can inspire, motivate and positively impact audiences.

King Richard is a well-rounded film that is exceptional in so many ways. As a sports movie it’s got the thrills and adrenaline. As a family drama it’s got the heart. As an inspirational movie it’s got the satisfying emotional catharsis. As fun entertainment, it’s got humor and suspense. And as an all-around feature film, its fresh and unpredictable (even if you know the Williams’ story). The film has an independent heart that beats to its own story rhythm with a relaxing pace that lets you enjoy the journey but also has a commercial sensibility and a kinetic pace that makes its 2 hour-plus running time fly by.  You don’t need to know anything about tennis to follow the plays in this film and understand the stakes and strategy and the emotional and physical effort that is involved. There are subtle philosophical messages and sophisticated psychological conflicts that I have never seen portrayed in a movie before. Black audiences will value the social commentary in this period piece that underscores the discouraging obstacles for living and thriving in America.

The story defies the predictable “cradle to grave” biopic structure to instead focus on the defining moments in their early career that started the girls’ trajectory as well as changed the fortune of the Williams’ family. By concentrating on those years where the stakes were the highest, the film ratchets up the tension and represents a satisfying personal victory for Richard Williams who refused to give up on his dreams for his family. In the titular role, Will Smith not only transforms himself physically into the character of Richard Williams, capturing his mannerisms and world-weary attitude, but also maintains a measured and balanced performance that keeps him likable to the audience (or at least sympathetic in his vulnerable moments and respectable in his resilience), while revealing moments of his controlling behavior that were undoubtedly frustrating for others to bear. The complexity of his character as a protagonist was a brilliant choice to anchor a film that truly embodies the harsh reality and struggle for the American dream.

The film is buoyed by a phenomenal script written by Zach Baylin (a Johns Hopkins graduate who played for their football team and is also a tennis fan himself) who gave the story its effective structure and gives the actors such memorable dialogue to perform while delving into their psychology in a revealing and wholly entertaining way. Aunjanue Ellis (Quantico, Lovecraft Country) delivers some of these powerful speeches that give her the chance to shine in the role of Oracene, the devoted wife and mother. She nails all the right emotional notes whether she is being supportive, confrontational, or acquiescent.

Other standouts in this flawlessly casted film include Saniyya Sidney (Hidden Figures, Roots, Fences), whose radiant smile and expressive eyes bring to life the hopes and dreams of Venus Williams, and Demi Singleton (Godfather of Harlem) as her devoted sister Serena, conveying the contradicting emotions of joy for her sister’s success while patiently waiting in the shadows for her own opportunity. As their two coaches, Tony Goldwyn (Scandal) exudes the confidence and caring of Paul Cohen and John Bernthal (Many Saints of Newark) humorously plays Rick Macci, the owner of a Florida tennis camp whose trust is tested to the limits.  Dylan McDermott and Rich Sommer each have smaller but memorable roles that add comic relief and fascinating insight into the world of contract negotiations.

Reinaldo Marcus Green (himself a former athlete) directs the film with his own finely observed nuances. His award-winning film at the 2018 Sundance Film Festival Monsters and Men previewed his ability to accurately depict a dazzling array of character types and human emotions. Rei is currently in Baltimore directing the new HBO series, We Own This City, which is a follow up to The Wire.

The film’s authenticity benefitted from having producer Tim White, whose own professional experience playing and teaching tennis, ensured the accuracy of the sports performances that were impressively achieved by the actors along with their stunt doubles. Tim and Trevor also assembled a talented crew that included Oscar-winning cinematographer Robert Elswit (Good Night, and Good Luck, There Will Be Blood), Oscar-nominated editor Pamela Martin (The Fighter, Battle of the Sexes) and Grammy-nominated composer Kris Bowers (who recently co-directed the Oscar-nominated short film A Concerto is a Conversation which screened at this year’s Annapolis Film Festival). Beyoncé even contributed a fitting song to the closing credits called “Be Alive” which will have people strutting out of the theater with a spring in their step.

As such, King Richard is an immersive experience into not only the game of tennis, but the game of life. It’s best seen on the big screen, so consider checking it out this weekend as it opens in theaters across the country... or find the biggest television screen in your house if you are planning to view it on HBO Max.