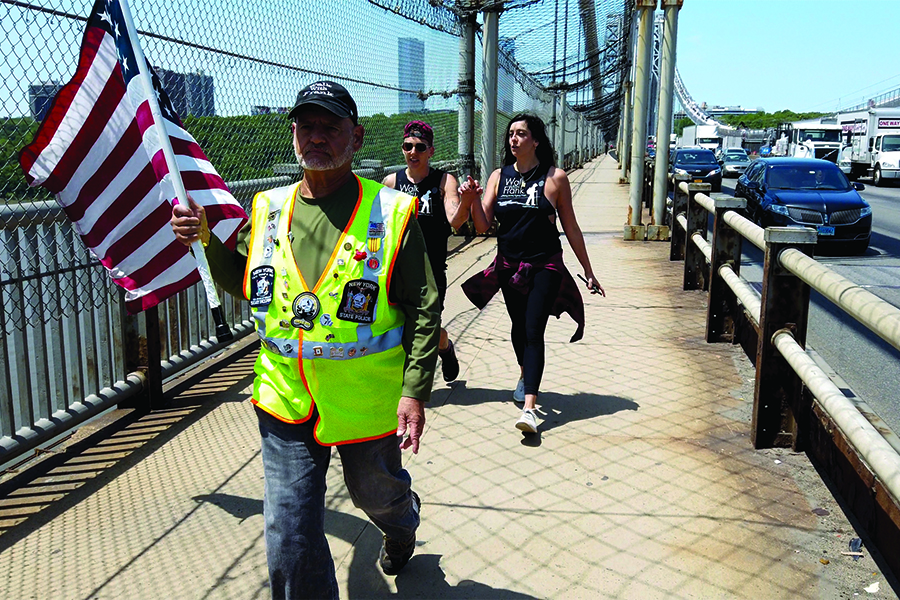 An excellent companion film to fellow Annapolis Film Festival official selection “Any Given Day”, another documentary which also tackles the issue of mental health, “Walk With Frank” takes a deeper look into a specific type of mental illness—post-traumatic stress disorder (PTSD). In celebration of his 70th birthday, Vietnam War veteran Frank Romeo decides to walk by foot across the entire state of New York in a grand and just bid to help spread awareness about the illness that he describes as “contagious.”
‍

Growing up in a tight-knight community, Romeo at the time didn’t see his choice to enlist with his best friend Peter as “political,” but “the right thing to do” in order to serve with other young men in the community they grew up with. During the former’s time in Vietnam, he experienced numerous traumatic events that included the deaths of both fellow soldiers and Vietnamese civilians. As at least two of Romeo’s core experiences in Vietnam were directly related to civilians, it’s especially heartbreaking when photos of him, Peter, and fellow soldiers being friendly with locals are juxtaposed on screen. These traumatic experiences ultimately culminated to the worst one of all, when Romeo is ambushed, alone, and severely wounded by enemy soldiers. Although safely evacuated to hospitals in Japan and eventually back home in the United States, Romeo’s budding PTSD was kickstarted by the immense survivor’s guilt he felt for leaving Peter behind. Such feelings grew to the point where even when Peter and other friends survived the war and returned home to get married, Romeo didn’t invite Peter to his own wedding because of said guilt. Despite attempting to assimilate back into civilian life by getting married and having six children, the trauma from the war never went away for Romeo. Further attempts to receive help from the US government included instances of mistreatment, neglect, and even outright jailtime from a drug sting operation. As such, decades of alcoholism, drug abuse, isolation, and familial strife ensued.

As Romeo treks across New York in “Walk with Frank”, going from veteran shelters to schools where he speaks with students and exhibits his artwork, he accurately states that PTSD, as it is known today, can be traced all the way back to the birth of modern warfare with World War I at the beginning of the 20th century when soldiers returned home with a new type of trauma. The phrase “shell-shocked” was initially used to describe soldiers back then as no other proper terminology existed. Tragically, the ailment went mostly ignored by both the soldiers themselves and the US government that sent them into combat in the first place. For the soldiers, according to Romeo, it was common that a bottle of liquor packed into their daily lunch box was the only form of aid they had. And for the government, they continued to maintain the status quo for literal decades as the phrase “shell-shocked” continued to be in circulation when Romeo himself returned home in an entirely different war. Even though new diagnoses such as “Vietnam War syndrome” and “depressive neurosis” were introduced during and after the Vietnam War, such diagnoses were still not entirely accurate of what veterans like Romeo were enduring, thus greatly impacting efforts to administer accurate and effective treatments. It wouldn’t be until some fifteen years after the end of the Vietnam War in the early 90’s did the US government finally and properly introduce the diagnosis of PTSD to describe the ailment of severe trauma that usually, but not exclusively, comes from warfare. Romeo’s discussions in the film with others suffering from PTSD shed more light on this reality, with causes stemming from the deaths of loved ones either from natural causes or by murder. Romeo understands that time is limited for veterans such as himself from older conflicts, and that it’s his duty and responsibility to reach out, connect with, and educate everyone ranging from the public, fellow veterans, and the next generations of soldiers fighting in the conflicts of today. And despite having to dredge up his deeply painful past every single time he talks about it, Romeo still manages to discover a bit more solace each time. He sums it up perfectly himself by saying that there may be no final, complete cure to PTSD, but the journey to recovery and healing is many things—none of them impossible.