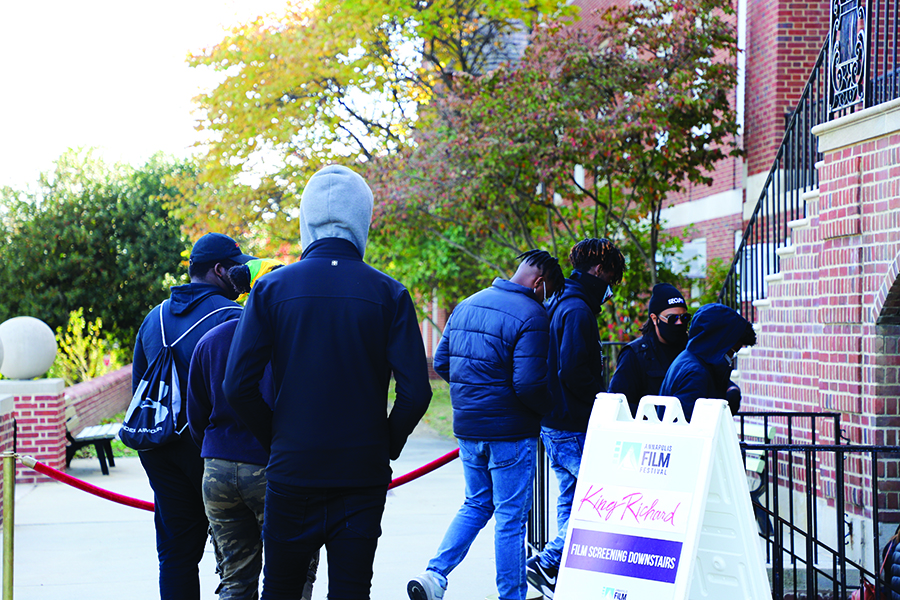 With a handful of the blue and white tickets dispensed to just 360 hand-picked people in Annapolis Saturday, Myron Brown brought his family of five to Maryland Hall’s Bowen Theater for “inspiration.”

The Browns had been invited through the Jack and Jill Club of Arundel Bay to a private screening of the newest Will Smith film, “King Richard,” in which Smith portrays the father and coach of tennis champions, Venus and Serena Williams. The film will not be officially released by Warner Brothers for another two weeks, but was brought to town by Annapolis Film Festival founders Patti White and Lee Anderson for an unprecedented sneak preview to an intentionally diverse audience.

“The Williams family story is an inspiration, not just to dads and not just to sports coaches, but to people in law and politics, drama,” said Brown, whose three children, ages 12 to 14, play soccer, but follow with interest the ascent of the Williams sisters in televised sports.

“We are big fans of the Williams sisters,” said Holly Brown, Myron’s wife. “We’re fascinated by their amazing, amazing story.”

From the gasps in the back of the room and the hoots of laughter rolling through the crowd, to the damp tissues used to dab eyes teary from emotion, the audience enthusiastically responded to the film, which told the story of the Williams family’s discipline and dedication to Richard’s dream of tennis domination with warmth and humor.

“This is a movie about a family’s passion and belief,” Anderson said, just before the film started rolling. “Watch this and believe.”

The Annapolis Film Festival, which has been virtual for two years, will be held in person again in March, just in time to celebrate a decade of festivals. All along, one of the festival’s loftiest goals has been to present diverse films to an audience that reflects the makeup of the town. They’ve successfully featured African American, LGBTQ and Jewish showcases, integrated social justice themes into each festival and reached out to organizations that serve marginalized communities for special events each year.

For this event, they reached out to community organizers like Laticia Hicks and Phyllis Tee Adams and organizations like Boys and Girls Clubs of Annapolis and Meade Village, The Links, Charting Careers, Seeds for Success and Manifesting Every Great Accomplishment, to bring hundreds of school-aged children into the theater. Looking out at the first of two audiences for “King Richard,” White said it finally looked like the film festival founders’ dream-come-true.

“This vision, of everyone represented in films that everyone wants to go to; we program for that,” White said. “For 10 years, we’ve moved forward to get here. But I can see in front of me what the vision originally was. It’s the most important vision of the whole festival.”

It wasn’t easy to procure the early screening of the much-anticipated “King Richard.” The film festival had to secure more than $10,000 in sponsorships and ask Maryland Hall to allow them free use of the Bowen Theater, which it did. Warner Brothers required the audience to put away their phones and asked AFF to hire security officials who quietly combed the aisles during the film wearing night-vision glasses in order to make sure no one was secretly taping.

White’s sons, Trevor and Tim White, produced “King Richard” with Will Smith, and appeared briefly on-screen, explaining how they read about Richard Williams in 2015 and knew they wanted to tell the story of a family’s “relentless pursuit of a dream.”

“I hope you find it as inspiring as we did,” Tim White said.

Mayor Gavin Buckley, who attended the film with his family, welcomed the masked audience by thanking “all who got vaccinated, making it possible to bring art and culture together again.”

He expressed the feelings of many in the room when he said that Annapolis is “lucky to have this festival in our town.”

That was the take-away for the Brown family, who spend most weekends taking their three children to soccer practices, games and some home workouts.

“It actually exceeded expectations,” said Myron Brown, who said that it gave his family a lot to talk about, including some profound lessons about persistence.

“The fact that everything he predicted came to pass, so speak… That was the thing that was really touching… We left there, talking about the movie and how appealing it was. We could sit the kids down after and talk about how we can take something from that movie; nothing even that complicated, but simply, commitment and belief. You can use that with a broad range of things for your whole life.”

For more information on the Annapolis Film Festival, which runs from March 31st to April 3, go to the website at https://www.annapolisfilmfestival.com/ and also check out their Annapolis Film Society, which hosts first-release films before anyone else, year round.