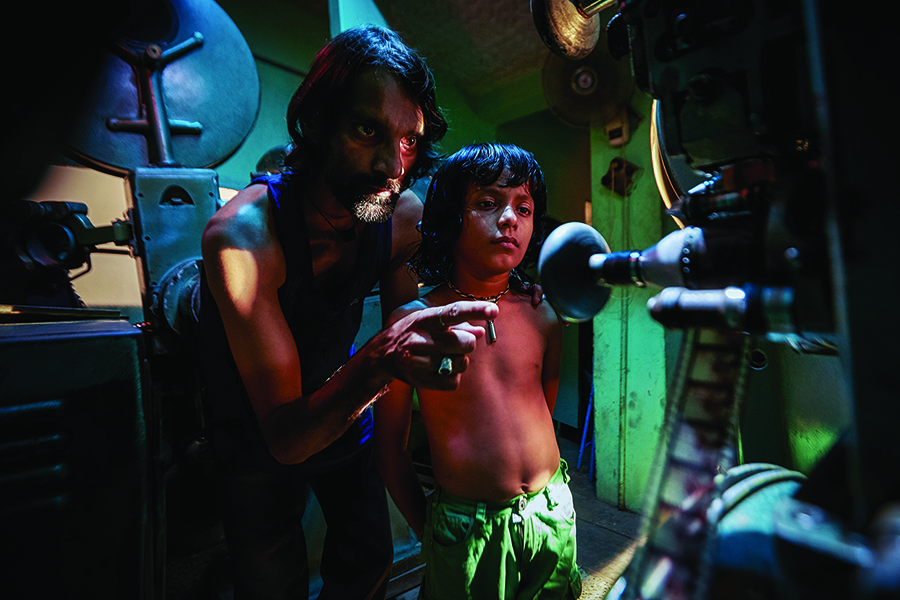 Sure to be considered to join the echelons of beloved films from filmmakers about the joys of cinema itself, such as “8 1⁄2” and “Day for Night”, “Last Film Show” tells the nostalgic tale of a young boy from rural village falling in love with cinema over one fateful summer. Director/writer Pan Nalin not only pens a semi-autobiographical love letter to cinema, but to the Indian state Gujarat where he was born. Born to a poor family that sells tea next to a train station, protagonist Samay is one day taken to the theater along with his younger sister and mother by his father, on an incredibly rare occasion to see a film in theaters. Otherwise vehemently against the nature of cinema, Samay’s father states that the condition for them attending is purely because of the film’s religious nature of celebrating an Indian
goddess. However, Samay’s spiritual connection isn’t with the message of the film itself, but rather on the wondrous mystery of how such beautiful images can come from light.

‍
Despite strong pressure from his father to follow strict guidelines of being an ideal son, Samay finds himself repeatedly drawn back to the theaters in desperate bids to see more films. Upon being caught and thrown out one day by ushers for sneaking into a screening, he strikes an unlikely relationship with the theater’s projectionist Fazal who takes a liking to Samay’s spirit and innocent love for film. The two quickly strike a bargain: in exchange for the wonderfully homemade lunches that Samay’s mother packs for his daily lunch, Fazal allows him to watch films for free—and even goes as far as mentoring him on film knowledge and projectionist duties.

‍
As Samay navigates this new delicate lifestyle, director/writer Pan Nalin expertly paints the world around him in lush, gorgeous strokes. In between more active plot points, he makes it a point to
highlight and embrace the quiet in between. Whether it’s master shots of characters collecting their thoughts as they look out into the beautiful countryside, or instances of close-ups of Samay’s mother lovingly cooking each and every one of his lunches from scratch, there’s a real sense of intimacy to “Last Film Show” that truly feels like a slice of life of Gujarat back in 2010. To further compliment this sense, Nalin often adds a slight blur to certain shots through lighting and focus that gives the subliminal feeling of looking back on distant yet unforgettable memories.

‍
While “Last Film Show” retreads familiar journeys of a youth falling in love with cinema, as is done in numerous other films, what sets it apart in this case is the backdrop of when and where it occurs.
Filmmaking is, at its heart, about storytelling. Something that transcends all borders and cultures in the world as it finds its way into people’s lives. But in a country with numerous different film industries that have different styles and approaches to filmmaking than anywhere else in the world, non-Indian audiences get the chance to look into the rich culture of India. A reflection of its people, many Indian
films exhibit a clear love for music and dance, for example. Just as how American audiences may find themselves cheering and clapping during major Hollywood blockbusters, Indian audiences in “Last Film Show” can be seen singing along and even dancing during screenings of films clearly dear to them. Just as how Nalin thanks several influential filmmakers in the opening credits of his film, “Last Film Show” is a clear celebration of the joys of film. And even when filmmakers and their works pass on or fall into ruin, they are never truly lost. Instead, they live on—as part of the lives they impacted in a poetic cycle of death and rebirth.