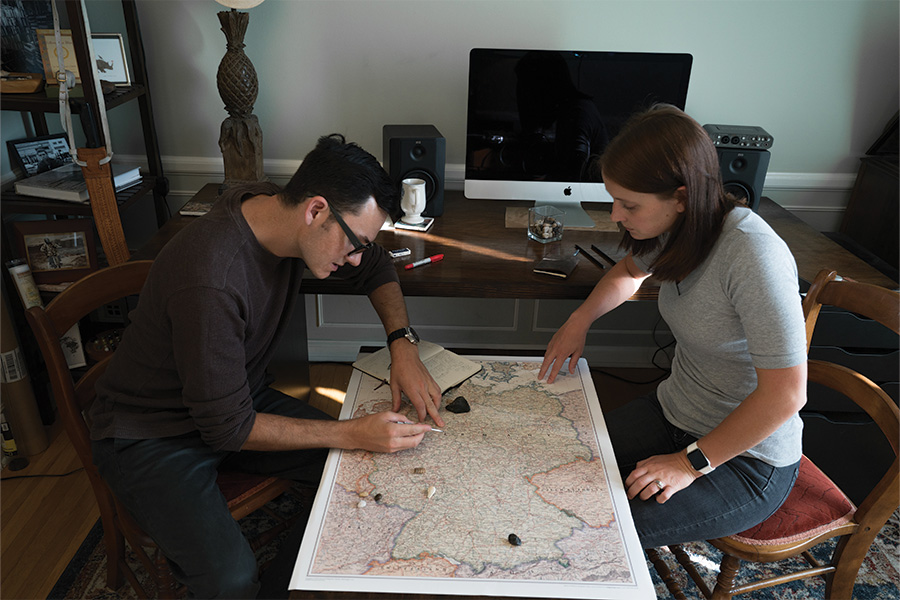 When independent filmmaker Mark Pedri’s self-narrated documentary feature “Dear Sirs” opens a creaky door on his grandfather’s modest suburban home in Rock Springs, WY, it is little more than a storage unit, untouched in the decade since reticent patriarch Silvio Pedri died. Mark and his film producer wife Carrie McCarthy Pedri step into the stale, but homey comforts of a household established in postwar middle America, complete with cross-stitch sampler, cuckoo clock, and a shelf in the basement full of his grandfather’s accordion collection. He only knew his grandfather as an “old man who limped and yelled.” But it didn’t take long for the house to begin to share some of Silvio’s unexplored past. Bedside coffee mugs full of loose change and military medals, a sharp knife concealed in Silvio’s mattress and brittle yellowed letters home, vaguely describing wartime capture by the Germans and endless marches from prison camp to prison camp gave Mark Pedri the first glimpse of the torment his grandfather experienced as a young soldier who joined the U.S. Army in 1942. It also brought a painful personal realization that in all the time he spent with his grandfather, he never thought to ask about his war experience. “I regret a million things I wished I had talked to him about,” Mark laments, early in the film. Instead of drawing those stories out when his grandfather was alive, Mark would cross the street from his own family’s home night after night through his teen years and sit in awkward silence with Silvio, “listening to trains.” Those trains, and their wending pathways through Wyoming’s bleak winter landscapes, provideMark with a poignant transition between Rock Springs and the journey his grandfather took as a prisoner of war in a similarly bleak winter on the front lines of 1944 and 1945 France and Germany. They also inspire Mark and Carrie to attempt to retrace Silvio’s evolution from soldier in Metz, France, to medical patient in medieval Hillersleben, Germany, to “forsaken” prisoner of war in Sandbostle, in Germany’s horrific Stalag 12A. The young filmmakers load stout mountain bikes with equipment and clothing and head out into the French countryside in an attempt to flesh out Silvio’s story. Accompanied by the surprisingly expressive soundtrack of accordion-song, the film weaves together beautiful, spare footage from their own bitter cold bike rides, archival photos from the National Archives, the Imperial War Museum, and the Department of Defense with rustic animations to show how Silvio rowed across the Moselle River with the 95th Infantry, marched shoeless into German territory and stood teary-eyed behind barbed wire fencing. Mark Pedri, who bears a striking resemblance to photographs of his grandfather, lucks out in finding that many of the stops along the way are remarkably unchanged in the 75 years since Silvio passed through, which helps put the soldier’s story into context. Yet, there remains stinging regret. Who, after all, hasn’t walked into the empty house of long-lost loved ones and wished the walls could talk? Especially now, when the world is all ears for historic context and there is a hunger for guidance from those who survived challenging times.

As a professional biographer, I have spent a lifetime attempting to piece together the lives of lost loved ones through interviews and archives and I connected personally with the sense of regret Mark Pedri expressed when, at the end of his journey, he concludes, “There are no revelations here. Just truth.” But I also appreciate the value of walking in an ancestor’s footsteps and opening every creaky door and window you can find that might shed light on important historical events. Watching this film against a backdrop of a new war breaking out in Europe, Pedri’s montages of trains and tracks crossing barren, snow- dusted expanses establishes “Dear Sirs” as a timely reminder to ask our remaining elders about their stories before it is too late.